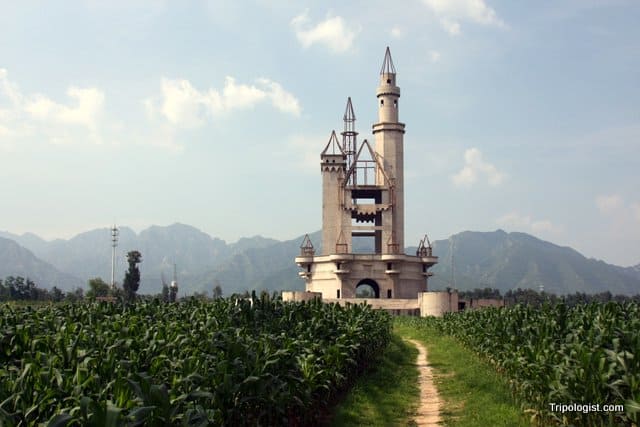 (Update 5/21/13: Rumor has it that Wonderland has been torn down. It may be worth verifying before you go. If you have any definitive information, please let me know.)

When travelers come to Beijing, they generally find their way to the Great Wall, the Forbidden City, Temple of Heaven, and many of the other sights around the city. However, very few make it out to what is surely one of the most odd and surreal places to visit in China: Wonderland Amusement Park.

The construction of the amusement park was begun in the mid-90s, but was stopped in 1998 due to disputes between the park and the land owners. Today, what remains is a tower castle and gates set amid tranquil cornfields.

I recently had the chance to walk around the park while visiting Beijing. Approaching the gates of what was supposed to be the largest amusement park in Asia is odd to say the least. The first thing that you notice is the empty parking lot flanked by fairy tale castle gates. Getting closer, though, it becomes obvious that the park is unfinished: glass windows lie shattered on the ground, ticket stalls are missing, and cracks run through some of the buildings’ facades.

Exploring the park is easy because the entrance gate is wide open; there are no fences to jump or signs in English or Chinese telling you to stay out.

The most obvious feature of Wonderland’s ruins is the giant unfinished castle. Sitting in the middle of an active cornfield, the castle is Disney World meets “Field of Dreams”.  However, since they didn’t finish building it, they didn’t come, meaning you are likely to only be joined by local farmers tending their fields.

Unfortunately, while you can walk through the cornfields to the castle’s base, there is no way into the upper reaches of the castle. You can, however, enter the buildings that flank the park’s entrance. When facing the park, the building to the right of the entrance holds nothing of real note. The left building, however, is a bit more interesting, featuring some decoration for parts of the Park’s entryways. It is also possible to enter the second level of the building by moving some of the rubble that has been placed over the stairs. The second floor seemed sturdy enough, but of course, enter at your own risk, as there is unlikely to be anyone around to help you in the event of an accident.

Overall, I would highly recommend a trip out to Wonderland Amusement Park for anyone looking for something offbeat to do while visiting Beijing.

Getting to Wonderland Amusement Park

If you’ve been to the Badaling Great Wall, you may have noticed the abandoned park just off the side of the highway. Sitting about 20km outside of downtown Beijing, the park is located right off the main highway to Badaling.

To get to the park, you have two options:

If you are already visiting the Badaling Great Wall by taxi, you could simply ask them to stop and wait for you. The castle is located next to exit 36.

If you are coming from downtown Beijing, you can reach the castle by public transportation. First, take the subway to Nanshoa Station on the Changping Line. Then, after exiting from Exit B2, cross the street and take bus 870 to Chenzhuang (陈庄). The bus will pass the park on your right prior to getting off. When you disembark from the bus, simple follow the bus’ path back to the park.

(Update 5/21/13: Rumor has it that Wonderland has been torn down. It may be worth verifying before you go. If you have any definitive information, please let me know.) 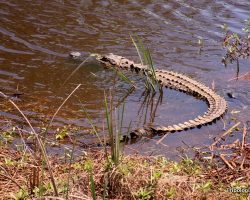