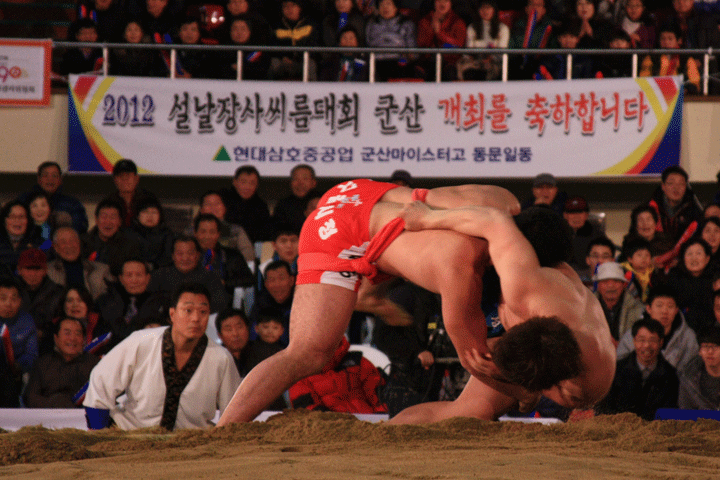 Monday was Lunar New Year, or Seollal as it’s called in Korea. However, instead of sleeping in and enjoying a relaxing day off of work, I woke up before the sun rose and headed off on a four hour trip to the port city of Gunsan, the location of the 2011 Seollal Ssireum Tournament.

Ssireum is a traditional form of wrestling in Korea, and athletes have been contesting it for hundreds of years. It is sort of half-way between Mongolian Bokh and Japanese Sumo, but with a twist. Instead of starting at opposite sides of the pit, the competitors start in the middle, each taking hold of a rope tied around their opponent’s waist and legs. The goal is the get your opponent’s knee or body to touch the ground first.

The tournament consists of four weight-classes, Taebaek (80kg), Geumgang (90kg), Halla (105kg), and Baekdu (160kg and under). The lighter-weight divisions start off the tournament, with the Baekdu class’s final being held on the tournament’s last day. Since I went on the event’s second to last day, I was able to watch the prelims of the Baekdu class and the finals of the Halla class.

Upon arriving at the Gunsan Sports Complex pavilion, I met Eddie of Tigers and Magpies. Eddie is a fantastic guy with a ton of knowledge and experience traveling around Korea. I highly recommend that you take a look at his site if you live in Korea or are planning on traveling here.

Eddie had been to several tournaments before and had been at this tournament since Saturday. His presence as the “token foreigner” and his excellent Korean language skills allowed him to make some great friends at the tournament. This led to my ability to not only sit in the front row, directly behind the coaches’ table, but also to meeting the mayor of Gunsan, meeting Lee Tae-hyeon (a former ssireum champion), and getting a free lunch in the wrestlers’ dining area.

The prelims of the Baekdu class featured some really big dudes. As I watched, Eddie gave me a quick run through of the rules. Meanwhile, the wrestlers pushed and pulled, trying to get the upper hand and not end up on their backs. I was amazed with the raw power these athletes displayed as they competed.

Once the Baekdu prelims were over, I went to lunch with Eddie, my wife, and one of the tournament’s entertainers in the athletes’ tent. After watching the wrestlers pile their trays high with kimchi and rice, I got my steaming bowl of ddok guk, a rice cake soup that is traditionally eaten on Seollal.

The finals started promptly at 2:10pm and began with a traditional Korean dance and the introduction of the eight final wrestlers. Between sitting in the front row and being a group of three foreigners, we were shown on Korean television at least 3 or 4 times.

Once the finals started, it was clear how important each match was to the wrestlers involved as fouls became much more common and the competitions much more intense. The arena also filled up with several thousand people. There were even cheerleaders leading the crowd in cheers.

The first match of the day featured a college student against Lee Ju-yong, a former ssireum champion who bared more than a passing resemblance to Muhammad Ali. After a quick take down in the first round by the college student, Lee Ju-yong stormed back, taking the next two rounds, winning the best of three match.

The other three matches of the first round featured stiff competition among the wrestlers and some fantastic takedowns.

After a brief break for a commercial and a few musical performances, the second round matches began. At this point, four wrestlers remained and a ticket to the finals was on the line for the winners. At the end of the round, only two competitors remained, Lee Ju-yong (Muhammad Ali) and Woo Hyeong-won, the lightest and heaviest competitors in the weight class.

Unlike the first two rounds, the finals were a best of five affair. In the first round, Woo took out Lee with an impressive take down, but hurt his knee in the process. This left the door open for Lee, who evened the match in the second round with a fantastic takedown of his own.

The third round saw the competitors each receive foul violations, Woo receiving one and Lee getting two. The round then proceeded to go to the buzzer with neither athlete able to take the other one down in the one-minute time limit. Woo was declared the winner because he had received one less warning than Lee, putting him up 2-1, one win away from being declared the champion.

With his back against the wall, Lee managed to draw the match even, taking down a very tired looking Woo with an impressive leg grab. This set up a decisive fifth and final round.

In a sport where every bit of advantage is seized, the referee struggled to get the wrestlers positioned evenly and correctly. Both Lee and Woo were issued two warnings. If either received another warning, they would “foul out” and their foe would be declared the winner. Unfortunately, that’s what happened, ending the day on a rather anti-climatic tone. Woo, who was looking tired and in pain, failed to position himself correctly despite many attempts by the referee and lost the match when he received a decisive third penalty.

Therefore, Lee Ju-yong, who had lost his first round of the day, was declared the winner of the Halla class at the 2012 Seollal Ssireum Tournament. After being presented with the champion’s robe and a bull trophey, he was paraded around the arena on a seat carried by six men.

Despite the somewhat disappointing end to the tournament, I would highly recommend a trip to anyone in Korea. It was one of the most exciting and culturally interesting events that I’ve been to during my time in Korea.

There are ssireum tournaments held throughout the year, but the biggest ones are held during Lunar New Year and Chuseok. Unfortunately, English information on the tournament is difficult to find, but hopefully will improve in the future. If all else fails, get a Korean friend to help you or call the English help line at 1330 and ask them to find the information for you. 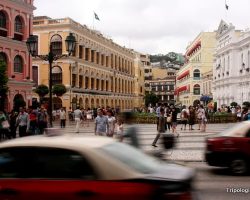 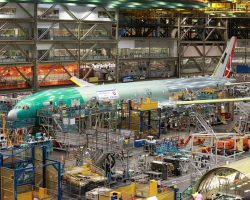